Shows have a way of disrupting everything – especially production schedules in the studio – which is exactly what last weekend’s show did.  Fortunately, they only occur twice a year, and it only takes about a week to get fully back on track.  This is actually last week’s painting – the current week’s painting is well along and should be ready in a few days.

The idea behind this painting was to create a design with a lot of action on the left side, leading to an area of repose – nearly empty – on the right.  Musicians would call this a negative accent – a big lead up to a pregnant pause before the action resumes.

Certain aspects of the composition helped with this.  The arrangement of objects on the left creates lines of thrust that the eye follows, mostly leading to the space occupied by the green ceramic teacup, as this image shows. 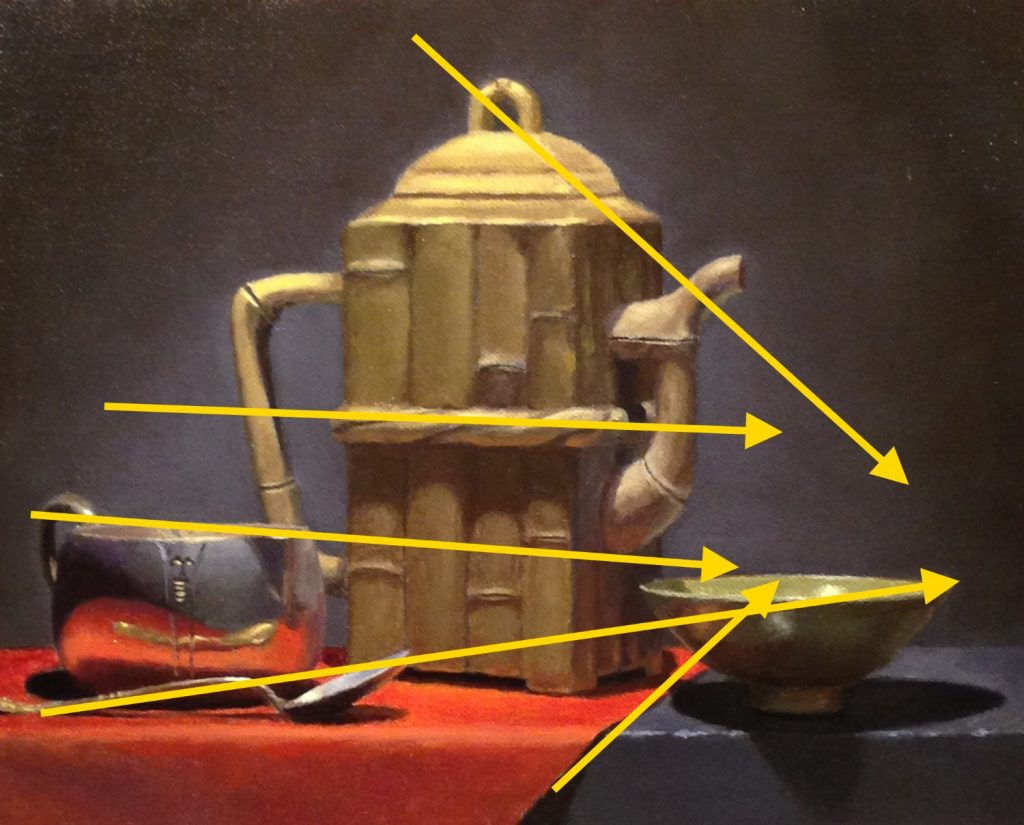 In addition, red is inherently an “action color”.  It’s prominence on the left side of the painting – both the cloth itself and the reflections it creates – give that part of the painting a lively energy that is balanced by the repose of the cooler tones near the teacup.

A well-planned design should always support the idea behind a painting.  In this case, creating a lot of action and energy that leads to a moment of calm and repose… a break for tea.

“Contemplation: Break for Tea” was done entirely from life (without use of photography).  It is painted with oil on linen, which is mounted to a hardboard panel.  The dimensions are 8×10 inches (20×25 cm).  It began with a straight-forward grisaille (black and white) underpainting.  This was followed by a mixture of opaque paints and glazes on top of the underpainting.

If you’re interested in adding “Contemplation: Break for Tea” to your collection, send a message using the “Connect with Me” section on the sidebar to the right.  Please bookmark this blog and watch for posts about this coming week’s painting.