The Grisaille The Simplest Form of Underpainting 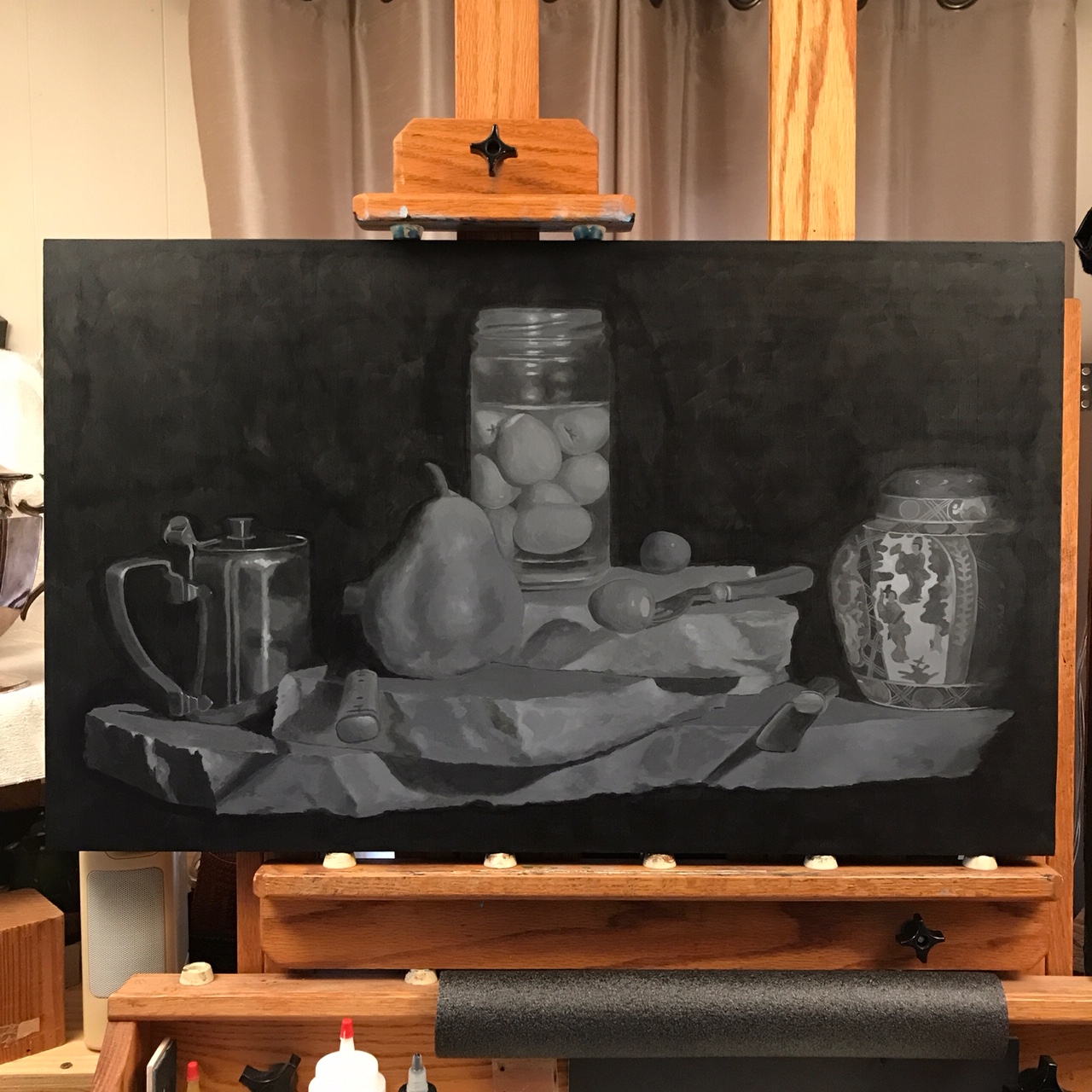 A completed grisaille for a larger painting

Underpaintings are monochromatic versions of the painting, over which the final color layer will eventually be applied.  It’s an intermediate step in the Flemish technique (which is the basis for the process I follow), that is done after the drawing and before the color layer.

There are multiple approaches to making an underpainting.  A grisaille is the simplest form, done with just black and white.  Other forms include verdaccio (done with shades of green), brunaille (shades of brown), and ébauche (dulled, muted forms of the final colors).  An artist working with underpaintings will choose an approach based on their own preferences and habits.

I prefer grisaille because of its simplicity, and the darks seem truer to me than the other approaches.

Painting a grisaille allows clear focus on the values (degree of light or dark) without the added complexity of color.  When working with full color, it becomes easy to misjudge the actual value, particularly with intense, saturated colors.

It would be easy to look at the intense red of the pomegranate above and assume it was quite bright.  If I were to start painting it with full color, I might make the mistake of painting it with too high of a value.  With the color filtered out, however, it becomes clear that the red is fairly dark – all middle values except for a few highlights.  By focusing only on value at this stage, it becomes easier to make them accurate.

A grisaille in progress

A grisaille provides solid modeling of the 3 dimensional forms in opaque paint.

This is important because many beautiful colors are transparent to some degree.  Without an underpainting, it’s difficult to convincingly give the illusion of a full-bodied object with this transparent paint – the plain background would simply show through and render the object flat.

However, with the form fully painted in black and white, any transparent color could then be quickly glazed on top of it.  This creates beautiful visual effects and deep, rich colors.

Final color being painted over the grisaille (including some glazing)

Finally, the grisaille is a dress rehearsal for the final work.

When working on it, hours – sometimes days – are spent studying the model and becoming intimately familiar with it.  This allows a richer understanding of the subject than if I simply started painting it.

Every part of the picture has already been thought about to some degree, and the final color layer is just a continuation of work already well in progress.

One potential weakness of the grisaille is that it can lead to less vivid colors in the final painting.  Mixtures of pure black and white create neutral grays.  When the final layer is applied thinly enough, some of this gray will show through and create a duller appearance.  Small amounts of either red or blue can be mixed with the black to shift the grisaille in warmer or cooler directions, as desired.

If you enjoyed this post, you may wish to read a detailed description of my process.